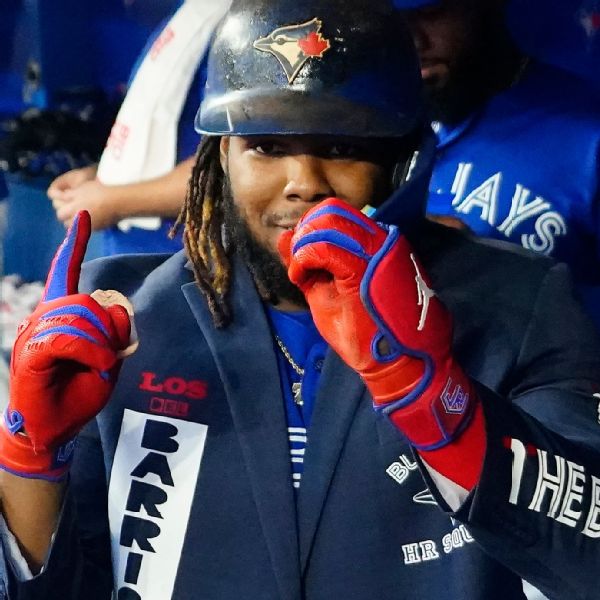 Toronto (81-62) has won three of four from the Rays (79-63), who dropped one game behind Seattle (80-82) heading into Thursday’s series finale, Those teams are in the three AL wild-card positions for the expanded playoffs, with Baltimore (75-67) four games behind the Rays.

Guerrero homered off Drew Rasmussen in the first inning, his 28th home run this season. At 23 years, 182 days, he is the youngest Blue Jays player to reach 100 homers, a mark that had been held by Carlos Delgado at 26 years, 84 days.

Guerrero said he planned to give his Hall of Fame father the ball from his milestone home run.

“He’s going to feel very proud of me,” Guerrero said through a translator. “When your son does something like that, I’m sure any dad would feel proud.”

Last season, Atlanta Braves star Ronald Acuna Jr. hit his 100th at 23 years old, and earlier this year, Juan Soto did the same while with the Washington Nationals.

Ross Stripling (8-4) allowed one run and three hits in 6 1/3 innings, struck out four and walked one to win for the third time in five starts. He won for the first time in nine career appearances against the Rays.

Stripling has pitched at least six innings in six straight starts since returning from a hip injury.

“Since I came off the IL, I’ve been able to really use my pitch mix to my advantage and keep guys off balance,” he said.

Adam Cimber replaced Stripling and gave up a one-out single to Manuel Margot. Christian Bethancourt followed with a potential double-play grounder but second baseman Santiago Espinal lost track of outs and threw to first. Isaac Paredes walked but Cimber got pinch-hitter Jonathan Aranda to ground into a forceout.

Yimi Garcia gave up back-to-back singles to begin the eighth, then struck out Randy Arozarena, Harold Ramirez, and Ji-Man Choi.

Guerrero and Bo Bichette each drove in a run in the third as Toronto pushed its lead to 3-0, and Espinal singled home Danny Jansen‘s double in the fourth.

Rasmussen (10-5) allowed four runs and six hits in four innings, snapping a six-start unbeaten streak that dated to Aug. 2 against the Blue Jays.

“They kind of timed everything up pretty well,” Cash said. “I don’t think they knocked the cover off the ball but they certainly did a good job of putting balls in play, putting pressure on us, and found holes.”

Rasmussen allowed more than three runs for the third time this season, and the first time since June 10 at Minnesota.

“They had a really good approach and they were really aggressive,” Rasmussen said. “My execution was bad with two strikes in particular.”

Jansen hit a two-out double off left-hander Josh Fleming in the sixth and scored on Raimel Tapia‘s hit to make it 5-0.

Ramirez hit a leadoff homer in the seventh.

With the victory, Toronto improved to 13-3 in its past 16 games against AL East opponents.

Philips Hue is leveling up with lighting strips for your monitor

Tage Thompson, a forward who can ‘help us reach even greater...

DALL-E can now help you imagine what’s outside the frame of...

Josef Newgarden into second in IndyCar standings with fifth win of...

Corsair Voyager A1600 review: a fancy but flawed showpiece