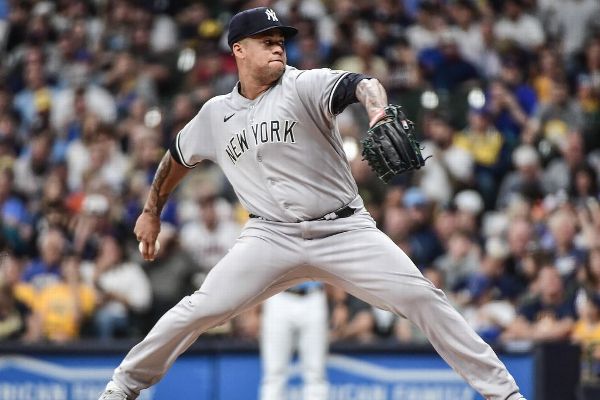 MILWAUKEE — New York Yankees right-hander Frankie Montas will undergo an MRI on his shoulder a day after lasting just 3 1/3 innings in a 7-6 loss to the Milwaukee Brewers.

Montas has gone 1-3 with a 6.35 ERA in eight starts for the Yankees, who acquired him for four prospects in an Aug. 1 trade with the Oakland Athletics.

“I thought his fastball velocity was a little bit down in that second or third inning on a consistent standpoint,” Boone said Saturday. “Now, in hindsight, that could have been a sign.”

“I think it could have had something to do with last night, but as far as I know, he’s been good and healthy into that,” Boone said. “Even last night, according to him, it was fairly minor.”

Boone acknowledged that he was “at least a little bit concerned” and said right-hander Domingo German likely would step into the rotation if Montas has to miss any time. Right-hander Luis Severino is scheduled to start Wednesday against Pittsburgh after recovering from a strained right lat that has sidelined him since July 13.

Montas was 4-9 with a 3.18 ERA in 19 games with Oakland before the Yankees acquired him. The 29-year-old had been dealing with shoulder inflammation in early July, as his July 21 start against Detroit was his first appearance since July 3.

Boone said the Yankees didn’t have any major concerns about Montas’ shoulder at the time they acquired him.

“Obviously we knew he was coming off an injury that only cost him 17 days,” Boone said. “But, yeah, everything would have suggested that he was healthy.”

Spencer Sanders passes for 4 touchdowns, runs for 2 more as...