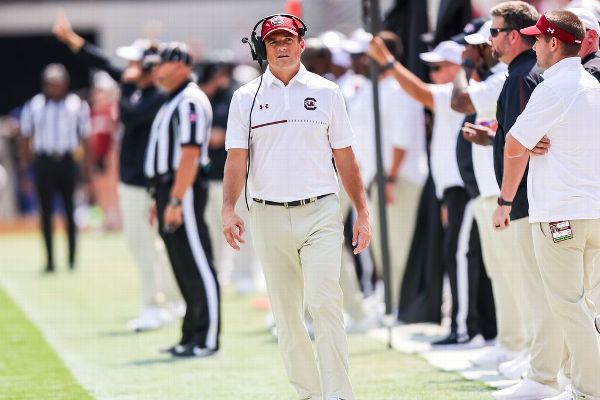 South Carolina coach Shane Beamer apologized Sunday for shouting at a group of female athletes to leave the field during a Title IX recognition in Saturday’s game against No. 1 Georgia.

After the first quarter, South Carolina invited all 275 of its female athletes to one of the end zones at Williams Brice Stadium, as part of an ongoing celebration of the 50th anniversary of Title IX legislation. The Gamecocks’ offense was lining up for a fourth-and-9 play, but had to wait for the female athletes to exit the field before snapping the ball. ESPN cameras caught Beamer screaming toward the athletes and gesturing in frustration.

“I apologize to anyone that I offended,” Beamer said Sunday.

Beamer told reporters he didn’t know the ceremony would be taking place, and had been debating what to do on the fourth-down play when he noticed the group in the end zone. Game officials had instructed the teams to be ready for play immediately after television timeouts.

“We send our offense out there to go for it,” Beamer said. “They’re on the line of scrimmage. Georgia is able to see the formation that we’re in. We did what we were asked to do and we were not able to snap the football. I look down in the end zone and I see why. My first initial reaction was to yell, ‘Get off the field.’ I had no idea who was down there.”

Georgia, which led 14-0 at the time, held South Carolina to four yards on the play and took possession. The Bulldogs cruised to a 48-7 win.

South Carolina soccer player Jyllissa Harris earlier Sunday retweeted a video of Beamer’s reaction and expressed her disappointment, writing, “We were on the field for maybe 15 seconds then screamed at to get off. If you want to honor female student athletes, then do that, not this.” Later Sunday evening, Harris tweeted that Beamer was “coaching in the heat of the game and has been nothing but supportive of female sports.”

Very well said! Like you said there is just still work to do! Coach Beamer however was coaching in the heat of the game and has been nothing but supportive of female sports. https://t.co/zz85cw1VDt

Beamer said South Carolina’s game operations staff “has a tough job” but could improve with making in-game ceremonies more efficient and getting any honorees off the field faster in the future.

“I hope people know me well enough to know what an advocate I am for women’s sports,” said Beamer, who often attends South Carolina women’s basketball games and other events. “I’ve got two daughters of my own that play sports. I’m at as many women’s athletic events at Carolina as I can possibly be because I believe in them and support them, and anyone that thinks otherwise surely doesn’t know me.”

Arizona Coyotes expect to sell out every home game at ASU,...

How to audio record on Windows