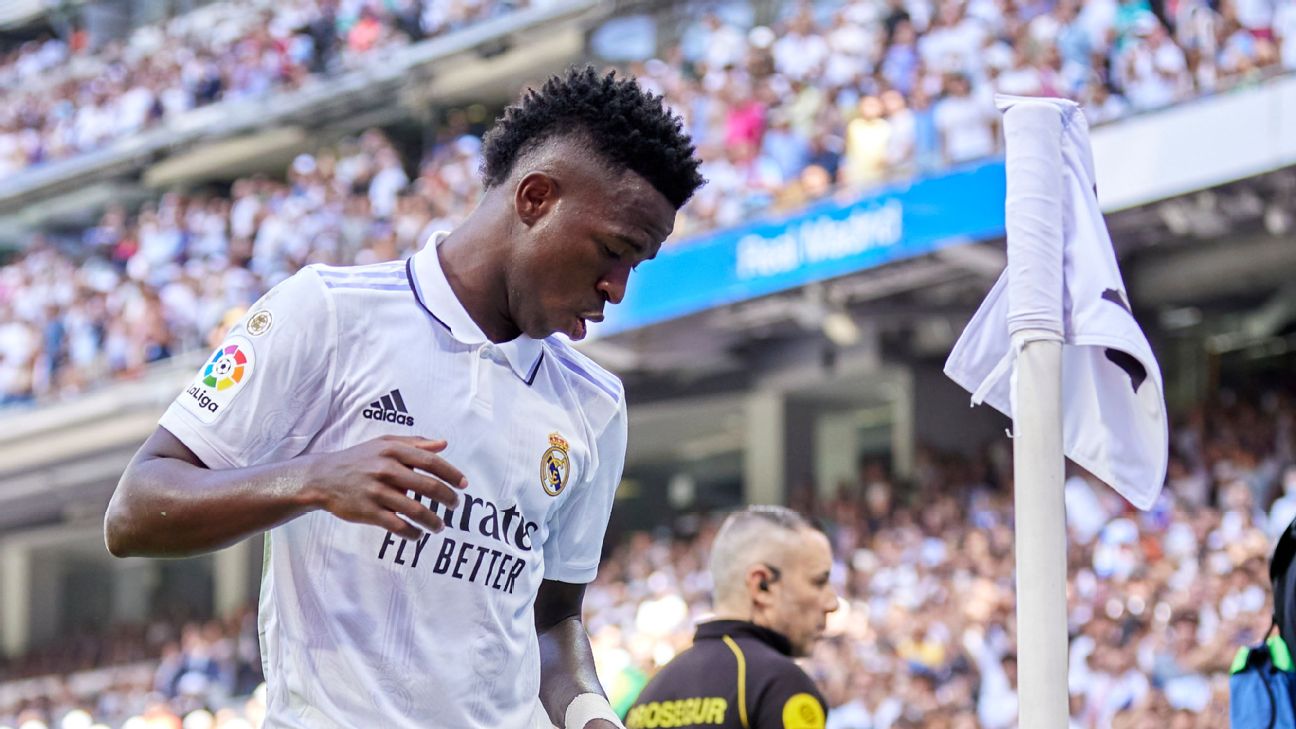 Real Madrid have condemned racist comments made about their Brazilian forward Vinicius Junior by a leading Spanish football agent and threatened legal action against anyone who voices similar remarks.

While appearing as a panellist on a Spanish soccer show on Friday, Pedro Bravo said Vinicius was not respecting his opponents with his celebrations, comparing his behaviour to that of a monkey — which immediately sparked backlash on social media.

“Real Madrid CF rejects all kinds of racist and xenophobic expressions and behaviors in the field of football, sport and life in general, such as the regrettable and unfortunate comments made in recent hours against our player Vinicius Junior,” Real Madrid said in a statement.

“Real Madrid wants to show all its love and support for Vinicius Junior, a player who understands football as an attitude towards life based on joy, respect and sportsmanship.

“Football, which is the most global sport that exists, must be an example of values ​​and coexistence. The club has instructed its legal services to take legal action against anyone who uses racist expressions towards our players.”

Bravo, who is the president of the Association of Spanish Agents, later took to Twitter to issue a clarification, saying he used the “monkey” expression to say Vinicius was “doing stupid things”.

“I want to clarify that the expression ‘playing the monkey’ that I have misused to qualify Vinicius’ goal celebration dance was done metaphorically,” he said.

“Since my intention was not to offend anyone, I sincerely apologize. I am sorry!”

But his comments were also condemned by Brazilian great Pele and the Brazil Football Federation, who came out in defense of Vinicius.

“Football is joy. It is dancing. It is truly a party. Despite the fact that racism still exists, we will not allow it to stop us from continuing to smile,” Pele wrote. “And we will continue to fight racism in this way, fighting for the right to be happy.”

The Brazil federation also used the hashtag #DanceViniJr. and wrote: “There will be dancing, dribbling, but above all, respect. On Thursday night (15), our athlete @vinijr was the target of racist statements. The CBF stands in solidarity and supports: #BailaViniJr.”

Neymar, who was left angry after he was booked for his goal celebration in PSG’s 3-1 win at Maccabi Haifa in the Champions League, tweeted: “DANCE VINI Jr.”

The Brazil star had further words of advice for Vinicius, writing in an Instagram post “Dribble, dance and be you. Happy just the way you are. Keep it up my boy, next goal we dance.”

Vinicius responded to Neymar’s comments on Twitter with the word “Always” and a picture of the pair dancing when playing for Brazil.

Speaking earlier on Friday, Atletico Madrid captain Koke has said Vinicius can expect “trouble” in Sunday’s derby against Real Madrid if he performs his trademark dancing celebration after scoring.

Asked if he would understand the reaction of Atletico fans at the Wanda Metropolitano if Vinicius celebrated in his usual way, Koke said: “There would be trouble, for sure, [that is] to be expected.”

But Koke said Vinicius, like any other player, was free to celebrate goals how he wanted to.

“If in the end he scores and decides to dance, well, it’s what he wants to do,” Koke said.

“Would I understand it or not? Everyone has their own way of being and of celebrating goals as they please.”

“He is a Brazilian, he dances very well, and I don’t think it bothers anyone,” Ancelotti said.

“He doesn’t need to change anything regarding his attitude because he respects his rivals and the referee a lot.

“He is a special player because of how he plays, although at times, because of his way of playing, rivals might get angry.”

Information from Reuters was used in this report.

Daniel Ricciardo told Oscar Piastri will replace him at McLaren