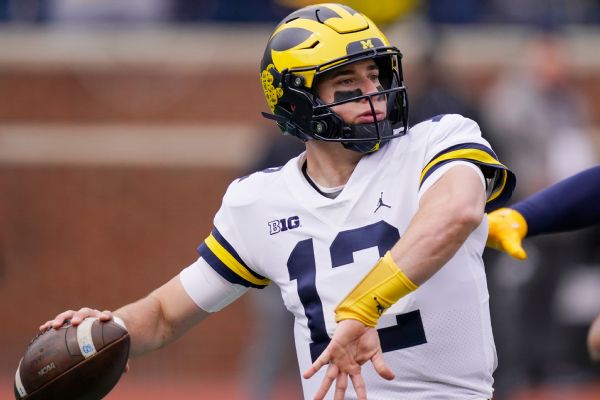 Michigan‘s backup quarterback Cade McNamara will likely be out for a few weeks after he sustained a leg injury late in the first half of Saturday’s 59-0 win over UConn.

Coach Jim Harbaugh told reporters after the game that it’s likely not a season-ending injury, but he will most likely miss a few weeks.

McNamara was the starter for the Wolverines last season and helped lead the team to a Big Ten Championship and a berth in the College Football Playoff.

“Cade, unfortunately, his foot was caught in the ground and got hit in the side…probably going to be out for a few weeks,” Harbaugh said. “Not going to be a season-ending thing, I don’t think, but he’ll miss some time.”

After a public quarterback battle in the first two games of this season, J.J. McCarthy took over as the starter and was the primary quarterback on Saturday against UConn. McNamara was brought in for a few snaps late in the first half and was injured after taking a hit.

McNamara only attempted one pass in the game, while McCarthy went 15 of 18 passing for 214 yards. The team was up 38-0 at half and eventually brought in multiple backup quarterbacks to get reps, including Alan Bowman, Alex Orji and Davis Warren.

Despite the injury to McNamara, the Wolverines still have depth at the position as Bowman was the starter as a freshman at Texas Tech in 2018, then started three games in 2019 before an injury sidelined him. He played in 8 games in 2020 before transferring to Michigan.

Warren doesn’t have much game experience, but went 12 of 23 passing for 175 yards in the spring game earlier this year. He is a walk-on, but has impressed in his limited time at Michigan.

When asked who will now be the backup while McNamara is out, Harbaugh said the coaches will assess the situation and that all options are open.

The partisan battle for state Senates

How to use Focus modes in iOS 16