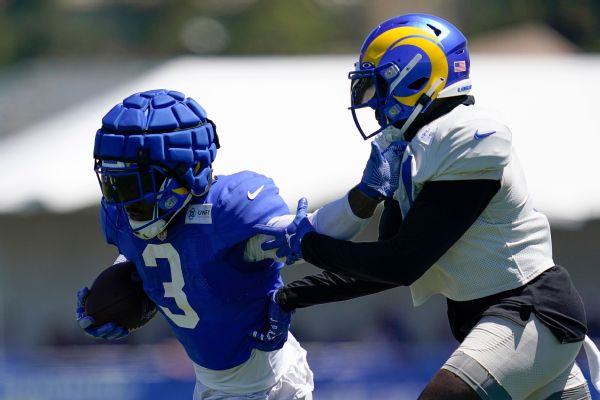 Rams coach Sean McVay, also speaking to reporters Wednesday, said he’d had a conversation with Akers about needing to play with more urgency, noting the reason the pair had that discussion is “a result of my confidence in him and the expectations we have and what we need him to be, which isn’t anything more than what he’s capable of.”

Akers said that conversation happened during training camp, but that he wasn’t expecting his limited workload in Week 1. Akers played just 12 snaps against the Bills, finishing with 3 carries for 0 yards.

And while Akers acknowledged that Thursday night was frustrating, he noted that the Rams still have 16 regular-season games remaining and said he didn’t “want to make it too big, bigger than what it is.”

“If Coach don’t think I’m being urgent, then [I need to] be more urgent,” Akers said. “That’s what it comes down to.”

When asked what he thought McVay was referencing when he cited a need for increased urgency, Akers said, “probably more so in practice, I would think. Not in a game, obviously, because that was the first game. Probably practice.

Akers said he thought he “did decent” in the game on Thursday, but said there’s “always room to improve, though.”

McVay also on Wednesday discussed wide receiver Allen Robinson‘s limited role in Week 1, saying he needs to have “some more intentionality about” getting Robinson those targets.

According to NFL Next Gen Stats, Allen was targeted just twice on 45 routes run. The 4.4% target rate was the lowest of his career.

“Whatever I say is going to be an excuse, but there wasn’t [a good enough job done] on my part in terms of the types of things that we were getting off to allow our players to be able to get into a rhythm,” McVay said. “And you credit Buffalo, they did a great job, but I think it’s just having a more specific approach to things that accentuate his skillset.

“That’s what I’ve got to do a better job of and Allen is certainly somebody that needs to be more involved and get more opportunities.”

Quarterback Matthew Stafford said the Rams are at their best on offense when they’re getting everyone involved.

“I can do a better job of distributing the football to those guys, getting those guys touches early on in games and helping them feel in the rhythm of the game,” Stafford said.

But despite the lack of targets, Robinson said he trusts Stafford’s “judgment” on the field, and ultimately it’s just “about us trying to win a game.”

“At the end, everyone wants to get opportunities, but at the same time, some of the ways they played us and different things like that,” Robinson said. “I’ve just got to continue to do what I can do and try to maximize my opportunities. But in some games, that’s how it goes sometimes. This week [we] just need to go back to the drawing board, try to figure out how we can be better.”

LSU Tigers DT Maason Smith ruled out vs. FSU due to...

Tado’s smart thermostat can now heat your home when prices are...