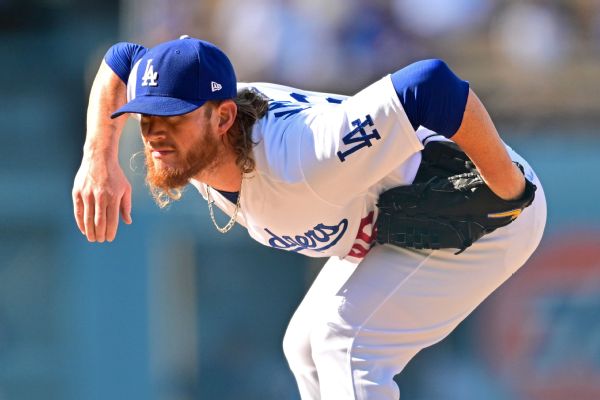 LOS ANGELES — Craig Kimbel is out as closer for the major league-leading Los Angeles Dodgers.

After months of defending him, manager Dave Roberts said Friday that going forward Kimbrel will be used in different innings and different situations over the final two weeks of the regular season. He said no one is replacing Kimbrel in the ninth.

“It might not be traditional, but I’m not too concerned about it,” Roberts said.

He was noncommittal about Kimbrel’s situation in the postseason. The Dodgers (104-46) have already clinched the NL West title. They’ll open the playoffs at home on Oct. 11.

Kimbrel has struggled in his first season in Los Angeles, where he replaced Kenley Jansen after the veteran closer signed with Atlanta in the offseason. The right-hander has a 6-6 record and a 4.14 ERA. Over 13 seasons with six teams, Kimbrel has a 2.33 career ERA.

“He was very open to doing whatever is best for the ballclub,” Roberts said. “He more looks at it as a challenge and that’s the way that we would expect.”

Kimbrel is 22 for 27 in save chances, but the ninth has become a roller coaster ride with fans booing at times.

Kimbrel got the victory against Arizona on Thursday despite hitting the leadoff batter, giving up a home run and walking another batter. The Dodgers rallied in the bottom of the ninth to pull out a 3-2 win.

His 394 career saves lead all active pitchers and is seventh all-time.

“I can’t predict the future,” Roberts said. “All I know is that this moment in time he’s ready to embrace whatever role we have for him.”