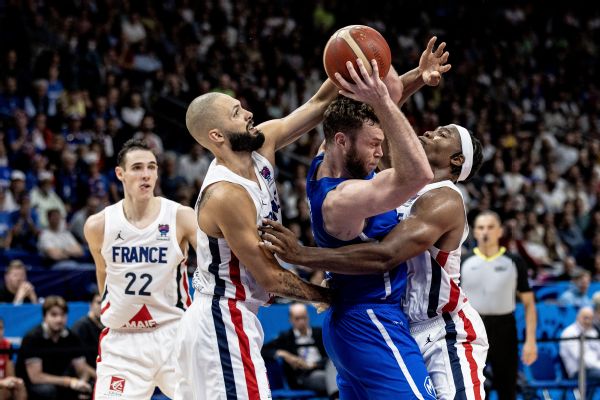 BERLIN — France pulled off a wild rally at the end of regulation then carried that momentum into a spot in the EuroBasket semifinals.

Thomas Heurtel scored 20 points, Rudy Gobert had 19 points and 14 rebounds, and France found a way to get past Italy 93-85 in a quarterfinal game Wednesday.

France was down seven with 1:59 left in regulation before starting a 25-10 run to finish the contest.

It was France’s second consecutive fourth-quarter rally and overtime win, after needing the same formula to get past Turkey in the round of 16 on Saturday.

“I don’t really believe in luck,” Gobert said. “Tonight, we could have given up, once again, but we got the baskets we needed.”

Next up for France: either defending champion Slovenia or Poland on Friday for a berth in the title game. The Slovenia-Poland quarterfinal matchup was later Wednesday.

The other half of the semifinal bracket was set Tuesday: Germany will play Spain, also on Friday.

Gobert started the game-ending burst with a dunk to get his team within 75-70.

Italy had a chance to potentially seal the game with 16 seconds left, up by two, but Simone Fontecchio missed a pair of free throws. It was an eerie resemblance to Saturday, when Cedi Osman, with Turkey up by two, missed two free throws with 12.2 seconds left to extend France’s hopes.

Heurtel’s layup tied the game with 5.2 seconds left in regulation. France trailed only once in overtime, for 23 seconds, and Evan Fournier‘s floater with 3:29 left put his team ahead for good.

Fournier scored 17 for France, which got 15 from Guerschon Yabusele and 13 from Timothe Luwawu-Cabarrot.

Fontecchio and Marco Spissu each had 21 points for Italy, which was seeking its first trip to the EuroBasket semifinals since winning bronze in 2003.

Luigi Datome scored 12 and Nicolo Melli added 10 for Italy, which trailed by as many as 11 in the early going but outscored France 31-18 in the third quarter and led by as many as eight early in the fourth.

“What can I say? Very painful, of course,” Datome said. “Very, very painful. But I’m so proud of my teammates.”

LG’s MoodUp is a fridge that’s as flashy on the outside...

School investigates if athlete is transgender, without her knowledge, after complaints