CHARLOTTE, N.C. — A “here we go again’’ buzz began on social media late last week when Carolina Panthers running back Christian McCaffrey was added to the injury report for a small cleat cut on his shin.

Then McCaffrey had only 14 touches and 57 total yards in the opener, a 26-24 loss to the Cleveland Browns, creating more buzz about him being on a pitch count.

Such is the life of a star back who missed 23 of 33 games the past two seasons due to injuries.

“I just want to win,’’ said McCaffrey, whose team has lost a league-high eight straight games heading into Sunday’s tilt at the New York Giants (1 p.m. ET, Fox). “Whatever it takes, I just want to win.’’

Even though coach Matt Rhule insisted snaps and touches weren’t monitored on Sunday, the Panthers understand getting the No. 8 pick of the 2017 draft back to the level he was in 2018 and 2019, when he didn’t miss any games, increases the chances for winning.

The same goes for the Giants and their star running back Saquon Barkley, who missed 18 games the past two seasons due to injuries.

But for most of the past two seasons Barkley and McCaffrey have been the poster children for injuries to star backs who had heavy workloads.

“It’s one of those areas that makes sense, but it’s hard to prove,’’ said sports medicine physician Dr. David Geier. “The problem is there’s just so many variables that influence that.’’

Data from the NFL in 2021 indicated up to 68% of players may be injured in a season. The University of Pittsburgh medical center found the risk of injuries to running backs are higher than any other position.

So to expect McCaffrey and Barkley, or any running back with a high volume of carries, to stay healthy for 17 games is unrealistic. Rhule acknowledges that.

“He’s a tailback in the National Football League,’’ he said of McCaffrey. “He had a ton of usage the two years before I got here [in 2020]. The propensity after that much usage of being injured is really, really high.’’

McCaffrey isn’t worried about usage. He believes he can return to his 2019 form, when he became the third player in NFL history to have 1,000 yards rushing and receiving in the same season.

Barkley feels the same way, and Sunday was a big step.

“I’ve just been trying the best I can to take care of my body,’’ he said. “I put a lot of money into my body and hopefully it pays off.’’

It’s difficult to draw any firm conclusions about the relationship between McCaffrey’s usage and why he has had five soft-tissue injuries the past two seasons after having none his first three in the NFL but here are the numbers. 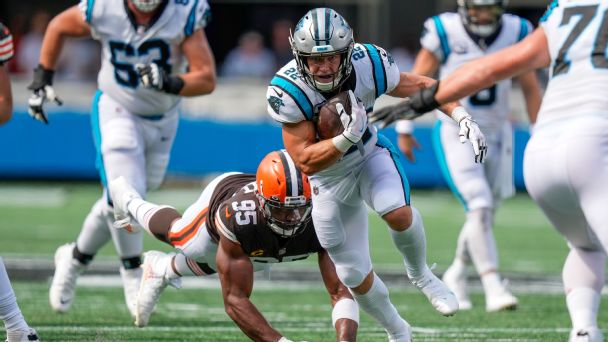 Then, four days later, in the first half of a Thursday night game at the Houston Texans, McCaffrey suffered a hamstring injury that kept him out five games.

Over the past 15 seasons, McCaffrey has two of the three seasons (2018, 2019) in which a running back played at least 90% of his team’s snaps, according to ESPN Stats and Information.

Former St. Louis Rams star Marshall Faulk, a player McCaffrey sought advice from during the offseason, is one exception to the theory of high-volume workloads leading to injuries.

Faulk averaged more touches per game than McCaffrey (21.9 to 19.6) in his first five seasons. In his sixth, 1999, he became the second player to have 1,000 yards rushing and receiving in the same season.

“He was so helpful on so many different levels, from a physical standpoint, how he took care of his body, and mentally, like what he watched, how he watched it,’’ McCaffrey said.

Faulk helped the Rams to a 37-11 record in his sixth through eighth seasons, a stretch McCaffrey entered Sunday. Faulk averaged more than 1,300 yards rushing and 80 catches per season during that span.

His best advice to McCaffrey was to take a day off when the team gives it to him. The Panthers are doing that, not allowing him to practice in pads more than three straight days in training camp with the plan to give him most Wednesdays off during the season.

The Giants, under new coach Brian Daboll, aren’t going to that extreme but are keeping close tabs on Barkley’s usage.

“It’s a crazy game,’’ Barkley said. “For me, I’ve been out so many games the past two years that every day I just walk in, I’m just thankful.’’

If it works out, McCaffrey and Barkley could be candidates for NFL Comeback Player of the Year.

“I’m a big fan of his game,’’ McCaffrey said of Barkley. “I love the way he works. I have a lot of respect for him. These last few years for the both of us have been really rough.

The mainstream strikes back

How to connect Philips Hue lights with Apple HomeKit and Siri

I use an RGB mouse pad in the office and I’m...